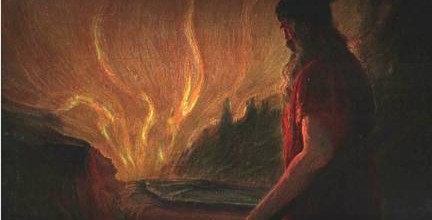 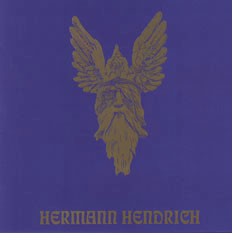 This beautiful book is the result of the enthusiasm and passion of a person. A few years ago, Elke Rohling had the idea of ​​forming a nonprofit organization to collect and disseminate the artistic work of the German artist Hermann Hendrich and to preserve its temples of total art for future generations. The result of this effort has been the cultural association Nibelungenhort that produced this book, a CD of the same title and a big effort to spread the work of Hendrich. Together with Fidus, Franz Stassen, e Ludwig Fahrenkrog, Hermann Hendrich was part of the group of artists and painters who were strongly inspired by the idea of ​​Wagnerian Gesamtkunstwerk. They shared a passion for Germanic heritage transmitted from fairy tales and sagas of the Edda that influenced many mystical movements, esoteric and artistic time. They lost part of the cultural climate in which, through the symbolist painting, the literature on the idea of ​​a mystical nature, and the movements of the reform of life, tried to create a new paganism at the end of 1800. In contrast to the precise lines of Art Nouveau Stassen, Hendrich chose a more expressionist technique that was able to masterfully depict legends and landscapes steeped in mysticism. Often his figures fade and become part of the landscape in its totality inseparable. His portrayal of Odin in the twilight of the Gods shows us a God, enveloped in darkness, while the fires of Ragnarök shine away. In contrast to the grandiose plans but never made of Fidus and Fahrenkrog for the creation of architectural temples, Hendrich was able to realize his ideas to give his art a permanent establishment and the public: the Nibelungenhalle Königswinters and Walpurgishalle Thale are the two best known and most famous examples. To increase the spread of the book's price is, for an art book with many illustrations in color and black and white, very content. The texts are in German and English. In the book there are separate chapters on architectural projects that involved the artist, comprehensive rundown on his most famous paintings, a biography and complete bibliography and a biographical portrait written by the same artist. We hope that the vision of this book Wandrelust to push towards the temples of Hendrich those who wish to pay tribute to his outstanding artistic work.

At the end of the eighteenth century and in the following years many artistic circles were characterized by the hegemony of a purely rationalist vision of the world that resulted from the break on one side and the loss of religious values ​​and the other a deficiency in the integral understanding of reality. Modern life with its increasing mechanization, the rapid traformarsi values ​​and lifestyles, were also occurring with the spread of new religious and metaphysical conceptions, marked the profound changes that were particularly evident in art and literature of the period. Bernahard Juchmann described so this atmosphere in his introduction to the book presentation of "Deutscher Halle Sagenring": "The anxiety and frenzy of our era in which the forces of mechanization strict destroy many places offer art with works by Hendrich a hermitage where the younger generation can devote themselves to reflection and contemplation in memory.". One reaction to this growing sense of uncertainty, a sense of threat caused by the rapid conver,was the interest in the mystical. At the turn of the century in the art world appeared a simultaneous tendency to return to the themes of Romanticism and especially the revival of the sacred, the myth, the ancient sagas. In this spirit, one can understand the artistic work of Hermann Hendrich. His work is inspired by the neo-romanticism and symbolism that showed the vitality at the end of the nineteenth century. His paintings are often characterized by the constant effort to represent not only the objective image of the subject but also its hidden truth, esoteric that is revealed to the artist through the contemplative path. Despite the considerable success achieved at the end of the last century Hermann Hendrich seems to have been completely forgotten by the world of contemporary German. In most art encyclopedias her name is not even mentioned and, when it is, the information is often incomplete or completely wrong. In addition to that it is not commercially available no monograph on his work. Only in very few publications are shown his paintings: a selection of the artists of the Harz region of Germany or the splendid anthology dedicated to finding artistic work of Richard Wagner (J. Speck- M. Infesta "The works of Richard Wagner in the Mirror of Art" Grabert Verlag 1995 info@buchdienst-hohenrain.de ). But none of these publications go beyond a generic presentation. In addition to the two famous temples of the Nibelungenhalle Königswinters and Walpurgishalle of Thale in which his fascinating paintings are accessible to the public, only one way to Berlin (Heringer Strasse which leads to Hendrichplatz) and a plaque on his birthplace of Heringen reminiscent of the painter. Conseguentemente the CIO, after his death,the rich artistic production Hendrich did not have a well-deserved recognition. The work is not limited to oil paintings and watercolors but includes large paintings for the temples which were built living testimonies of his immense passion for the Romance and Germanic mythology. This book is the first comprehensive monograph devoted to the artist since his death in 1931 and tries to bring the public's attention on Hendrich. Despite accurate research on the life and works of Hendrich many aspects remain unknown. A considerable number of his paintings were destroyed during the last war; many of his early paintings were exhibited and sold in the USA and you do not know the location more. In the complete index of the missing works has not been compiled: in the text we have inserted a temporary index and presumably incomplete. Despite these circumstances, it lists the major works but also the biography remains incomplete. The civil offices of the places where he lived Hendrich often did not provide useful information and many documents were destroyed by war. Even in the absence of concrete data we tried to do a biographical work as accurately as possible but errors can not be excluded. Regarding the paintings has tried to make a complete list, listing also the sketches from which. Hendrich made many sketches that often became a picture only when the designs became popular magazines or exhibitions. His obsession with painting there is shown by the fact that he often used the canvas on both sides, especially when the inspiration led him to represent a change in the subject he was painting. Much of the information in this book have been provided by people who have personally known Hendrich. The use of these sources has led to the problem that many of these sources were in close friendship with the artist or were fervent admirers of Richard Wagner as it was the same Hendrich. Often they found in the works of the Hendrich reflection of an ideal state of being, and so lost their judgment of objectivity. The idea of ​​this book Hendrich was born from the desire to have and give to others more information about the artist after the visit of the famous temples of the Nibelungenhalle Königswinters and Walpurgishalle of Thale. The intention of the book is to build a bridge between the past popularity of the artist and the current state of absolute forgetfulness of his work in modern times, when, on the one hand his name sinks deeper into oblivion and on the other hand we are witnessing a strong trend towards a return to the values ​​of the past and the rediscovery of their cultural roots that can be recognized through the work of Hendrich. This work is not intended to be a scholarly work. It would be better to consider it a first track, an introduction to a work of art that will become increasingly difficult to find and admire: know how many will be able to contemplate these paintings in the quiet reflection of how hard efforts of search cost.

The cost of the book including the cost of shipping is 25 Euros to be sent to:

In the Silesian city of Schreiberhau (Today in Poland under the name Szklarska Poręba) was completely renovated the house that he built in the German artist 1899 and that became the basis for the development of a large colony of artists. The house, in the possession of the University of Breslau, will be a public cultural center for the study of art, history and culture. View http://www.nibelungen-hort.de/